What is algorithm training? And why should I care?

Once upon a time, the main purpose of web analytics & conversions tracking was to keep score (largely for yourself). So you could have a readily available tally & know...

It was a revolution at the time. For those of us that remember the server log days of analytics... When Google bought Urchin & launched Google Analytics for FREE to the public in 2006...

🏃 In a hurry? Skip to the templates »

It was as if the heavens parted & showed us all the way not only to growth & profitability...

But it was also the way to finally quantify & justify marketing costs in an empirical way that executives could understand & get behind.

Many consider it the dawn of the modern performance marketer.

But as useful as it was, it was still fairly simple. Set it up, watch your numbers & if the cost-per was low enough, then you're good!

Life was simple. And times were good.

Over the years, Google & Facebook's dominance (& data sets) have grown ...

They've both gone public & sworn a lifelong oath to create shareholder value, above all.

One day, some brilliant engineer had a thought....

"We have all this data... Advertisers are "telling" us what success looks like (by firing conversions)... why don't we just write some code to do all this "management" stuff for them?"

The idea had legs & word spread.

It showed up in the form of a dizzying stream of new features that largely had one thing in common... Taking control away from advertisers & giving it to Google.

Here are a few examples to jog your memory...

So that they could actually have the data to be more effective than a human at finding the right audience & showing them the right ad at the right time.

Consider the nearly infinite expanse of data that Google has on you...

The more you think about it, the creepier it gets.

But privacy & ethics aside, it's quite a brilliant strategy if your mission is to organize & make accessible control the world's advertising budget.

So here we are... Entering a new era once again -- the age of algorithms, machine-learning & robot-driven performance marketers.

Similar to the dawning era, those that move quickly & decisively will have a leg up. And it may be difficult or impossible for the slower-movers to catch up.

Luckily, it's still very early innings. So if you feel behind the times, don't worry.

Algorithm training (aka, data signaling, aka "training the robots") is the idea of more effectively communicating business outcomes back to the ad networks (namely, Google/YouTube & Facebook/Instagram) ... So as to harness their massive datasets & robust machine learning engines to find more & more customers that are perfect for you.

It's a compelling promise. And it makes a lot of sense ....

If you're like most advertisers, you have Conversions set to track & fire back to Google anytime somebody fills out that form.

So you're effectively telling GoogleBot: "Of those 100 clicks, these 10 are valuable"

But what you most likely did NOT communicate to Google's algorithms ... was that the ONE that became a customer is by FAR more valuable than the other 9 that just became a lead.

You may have celebrated the win on your Zoom call... But nobody ever told Google.

Thus, they're taking all 10 leads, crunching a model together & going after the top 10%.

Wouldn't you rather send Google on a quest to find that top 1% if you could?

That's what algorithm training is designed to do.

Of course, in real life things are more complicated.

In any given purchase journey, there are a series of on- & off-line actions or behaviors that are inherently valuable to advertisers...

And currently, not many advertisers are paying attention (and/or pinging back to Google).

Examples to illustrate the point

We won't get into the technical "how to" of tracking or firing events. Instead, we'll highlight what Google internally calls the  "Lead-to-sale" journey.

If you can get it working for you (& not against you), it holds a lot of promise.

Our Google rep just shared these industry-specific templates that you can use to optimize for your "lead-to-sale" process. We thought you might like to apply them for your Google Ads account, so we decided to share them here. 🙂

Look below to find the template that applies to your industry. If you have any questions about how to apply these templates for your ads, feel free to shoot your account manager a note (if you're a WebMechanix customer) or schedule a time to consult with our team here.

This template is ideal for any non-mortgage type lenders, offering products such as personal loans, auto loans, student loans, etc. 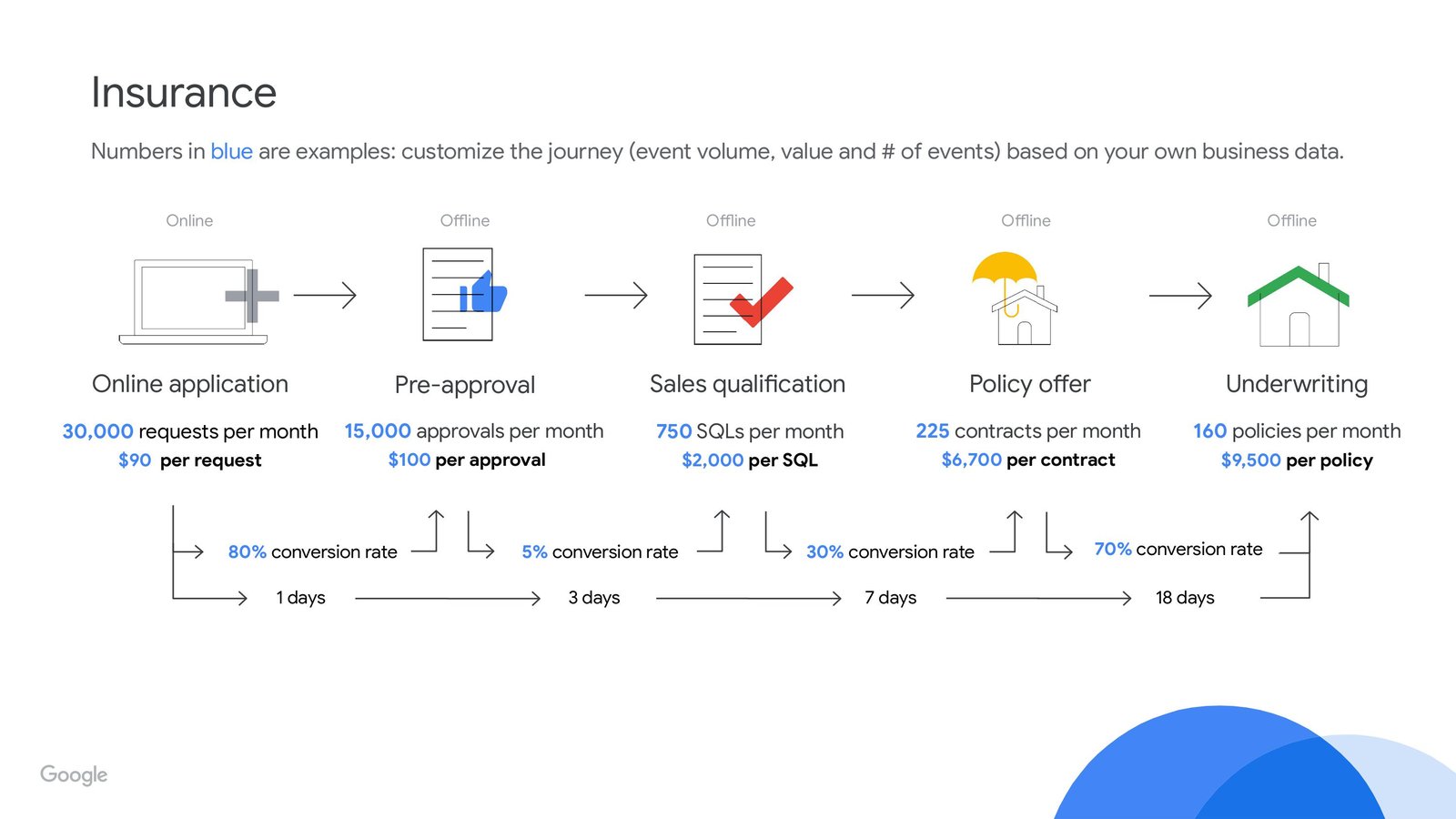 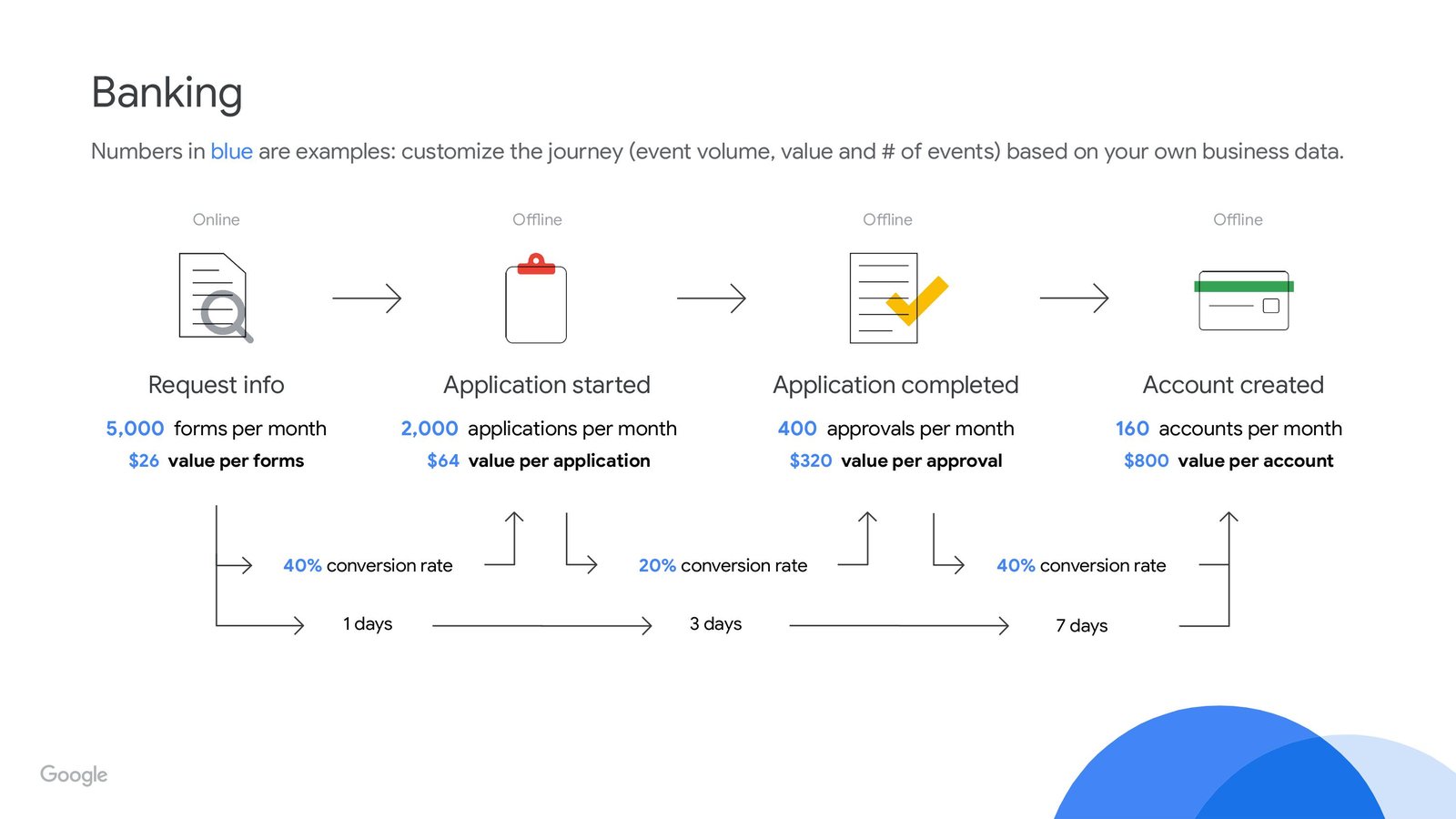 This template is perfect for banks & credit unions who want to get consumers to sign up for a new business or checking account. 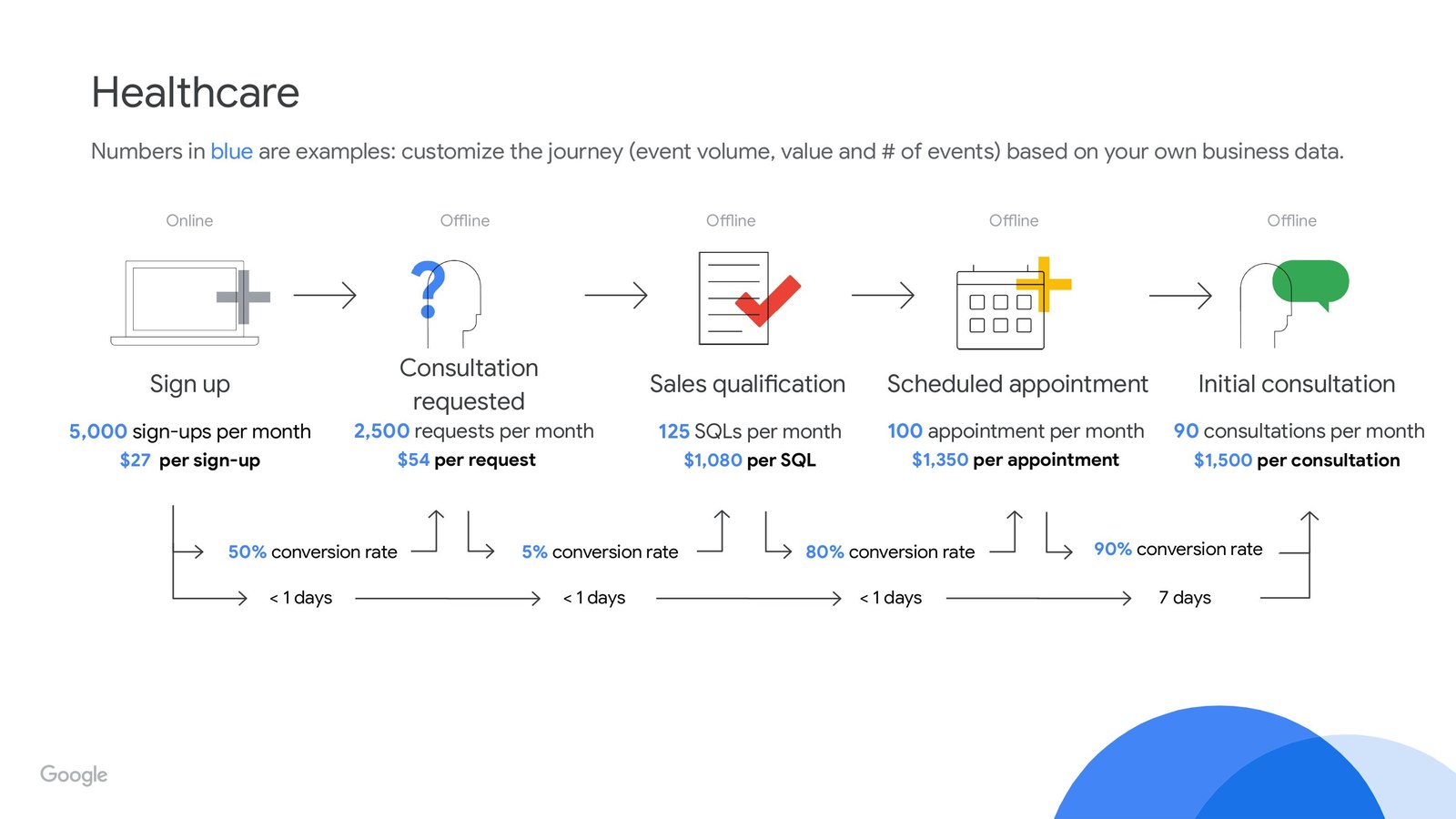 This template is suited for any healthcare organization that accepts patients. Some use cases include hospitals, telemedicine, specialist care providers, cancer centers, functional medicine & wellness providers, dentists / orthodontists & elective surgery providers, among others.

This is the perfect template for any B2B SaaS company that uses demos or free trials to book new revenue. It can also be useful for many B2B services & consultants whose clients follow a similar lead-to-sale journey (e.g. "free consultation" or "free quote").

If your company is looking to fill (a lot of) open job positions, this is the template to use to bring in more/better candidates.

Use this template if you're a real estate broker looking for seller leads or buyer leads that won't kick the tires & will actually close. 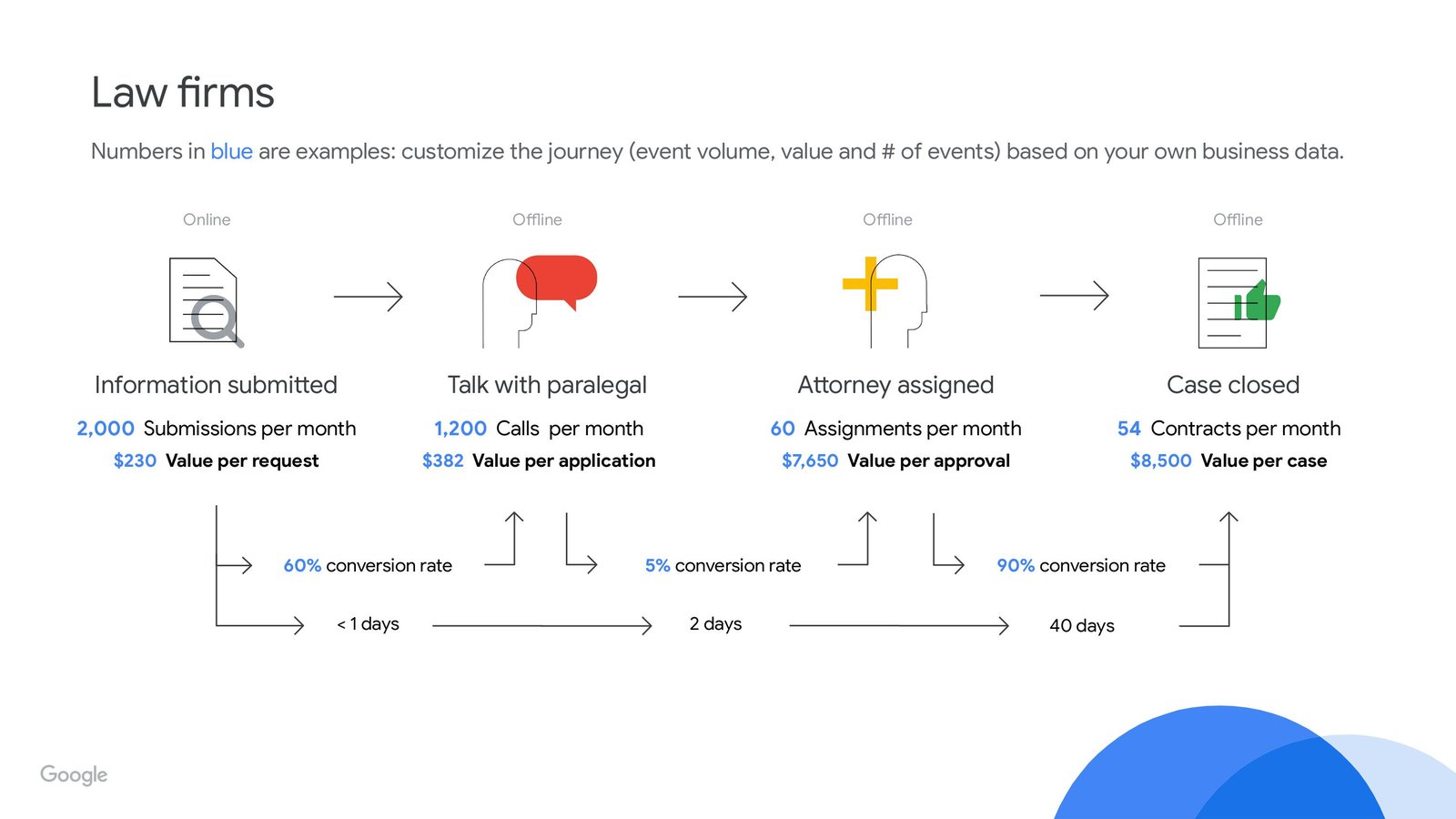 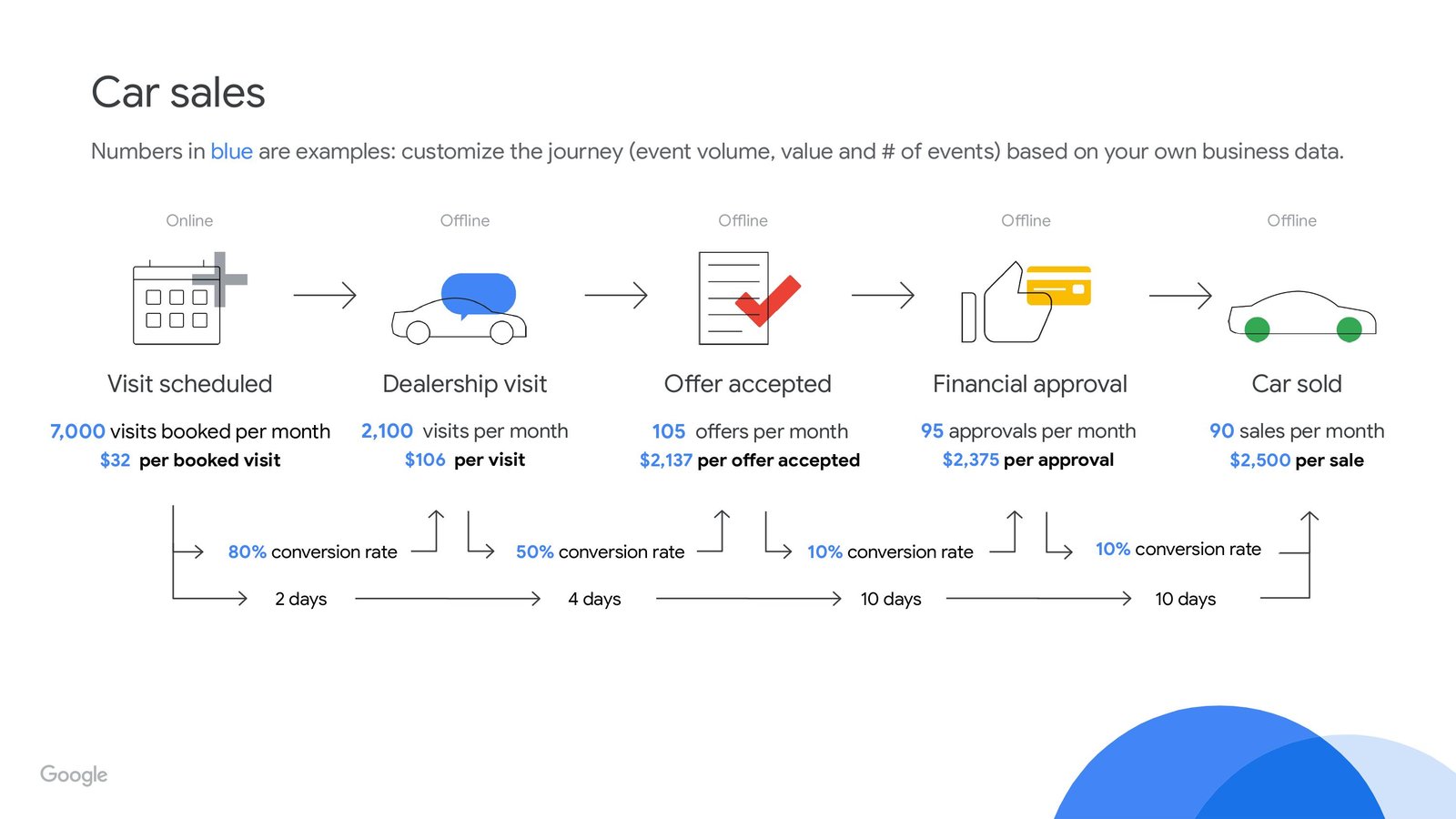 This template is great for automotive dealerships where a sale starts online & ends in person.

It's time to take action. Grab the template above that works best for your business or industry & start building your lead-to-sale journey out in Google Ads. Trust me, you'll be glad you did. 🙂

(By the way, we're here to help if you need it. Just give us a shout!)

Chris Mechanic
Co-Founder & CEO
Referred to as the "Master and Commander of the SEM landscape" within the walls of WebMechanix. Has an entrepreneurial flair, loves people, reading, teaching, and imagination.
© Copyright 2021 WebMechanix. |  Privacy Policy   •   Terms of Use